As the dust settles on the Yellow Vest protests in France it is now time to pick through the underlying stories to find the real motives behind the unrest .

Are the protests entirely organic ? It was almost as if many of the protesters were acting in rythm , almost like a cohesive unit . Such unrest is very rarely spontaneous , although the French people do have a long history of taking their issues to the streets , something I commend them for .

Are there hidden hands at play ?

The opinion piece at the link below is from Peter Koenig at Information Clearing House who is correct in stating that the protests are not related to the French fuel tax rise , at least not in a direct way .

One conclusion that we can reach is that the French populace are not very happy with their government , a sentiment no doubt echoed throughout the Western world as oligarchs , corporations and cultocrats decide what is best for ourselves and our cash . Cash which they believe they have a historical entitlement to , spending it as they wish in the game of global power play . All for our own benefit of course .

So where does the anger stem from ?

Apparently the sale of assets belonging to the French public is being funneled to a centrally controlled slush fund which is to be used for ‘innovation’ , as such the whole scheme is termed the French ‘Innovation Strategy’ . Officially , one half of the strategy is basically a form of long term planning , taking into account the environment and the welfare of the public . The remaining half is tied closely to a future of global technological change , this includes technological research and technological transfer to private entities .

Traditionally the French public have adopted a social system of governance based on public ownership , many people are quite content with a rural lifestyle based on community and the finer things in life .

The strategy also acknowledges the fact that many countries across the globe think they must now innovate as an imperative , the only other option is to be sucked into the sphere of one of many competing global power structures .

Other power blocs now have systems and methods of influence which no country is immune from , let alone the individual .

Also acknowledged is the influence the Anglophile power structure has wielded over Europe in recent decades , particularly since the end of World War II .

The third offset strategy (TOS) is an initiative formulated by the US deep state and their respective partners and poodles in the corporate and global arenas .

The TOS is described as follows :

“identify and invest in innovative ways to sustain and advance U.S. military dominance for the 21st century.”

The TOS initiative is mirrored by the French administration who have announced a similar initiative termed the ‘Strategic Review of Defense and National Security’ (SRDNS) . Many countries have a similar national strategy , some plan for defence , others plan for offense .

You can rest assured that the SRDNS is joined at the hip to the French Innovation Strategy mentioned earlier , the funding and research arm perhaps .

According to a paper produced by a US based deep state ‘think tank’ the German Marshall Fund of the United States (GMF) , the SRDNS will concentrate resources on the following :

“Investment is envisioned in fields such as hypervelocity, sensor fusion, and active stealth. It will also build on breakthroughs in civilian technologies (such as artificial intelligence, robotics and decisional autonomy, systems networking, new materials, biotechnologies) .”

Although the document does state that at the moment France is in limbo , or should that be purgatory ?

“Through its technological and capability advantages, the United States is an essential defense partner for France in the public and private sectors. However, cooperation in the field of defense innovation opposes two contradictory arguments. On the one hand, France’s authorities as well as its research actors and companies regularly express the fear that the country would experience a serious strategic and technological downgrading if cooperation with the United States is not deepened. On the other hand,
however, the prospect of weakening France’s strategic autonomy by increasing its already considerable defense dependence on U.S. technologies and capabilities is also a source of concern.”

There is also a recognition by European states that many facets of modern asymmetric warfare are silent and invisible . AI can be leveraged in a wide variety of ways to pressure anybody and anything , even a whole country .

The algorithm is now in charge .

In the future all conflicts will be created , fought and decided by the algorithm .

Although Macron would prefer to leverage AI for the good of humanity , not for control or profit . But he would say that , wouldn’t he .

The proposed European Defence Force (EDF) has been championed in recent years by both Macron (France) & Merkel (Germany) .

I am sure that the EDF marks a turning point in relations between the European bloc of countries and the Five Eyes anglophile bloc . Many European leaders are now waking up from the global catastrophe called the ‘War on Terror’ , which only served to fan the dialectic of terror , reaction , extraction . Extraction being the pillage of global resources and the siphoning of sovereign domestic power and funds , all of which comfortably found its way into the grubby hands of the military corporate complex and their partners .

As usual the UK administration does not know which way to turn , maybe the leash has slipped off , maybe they are caught on a fence .

The formation of a European Defence Force has had many critics . Well not quite , two to be exact .

* (Other Poodles = Definitely not the UK establishment)

A split in NATO ?

As such Macron and Trump have engaged in a spat of handbags at ten paces , both appear to be the front men of increasingly rival factions . In fact the knives have been ‘out for Macron almost since day one’ (I’m a poet , but I don’t like to show it) , he does not toe the line , there are fears that he may represent rivals or at least a rival vision .

It is not the first time the two puppet politicians have had a little public tête–à–tête .

The Paris agreement on ‘climate change’ (also known as burning down the house) has also been dragged into the wider argument .

Regarding the protests in France Trump laughingly backhanded Macron with his handbag .

Although they do agree on one thing . 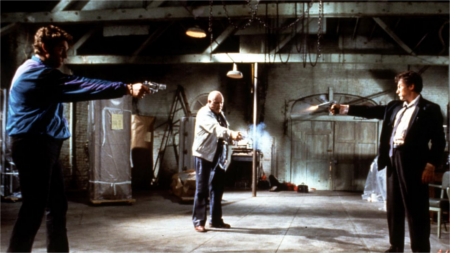 What is the Hegelian Dialectic?

In a scene straight out of Reservoir Dogs all parties are now blaming each other for the ‘Yellow Vest unrest‘ (I’m a poet and I know it) .

The blame game is not complete without a reference to the ‘Russians’ , which is a shoddy attempt to throw more fuel on the Russophobia fire .

According to a reputable source known as the Alliance for Securing Democracy (ASD) , France is probing Russian Influence on the Yellow Vest protests .

According to Wikipedia , the Alliance for Securing Democracy is housed at the German Marshall Fund of the United States . Now where have I heard that name before ?

Although , perhaps cryptically , Macron in a fit of pique swung his handbag back at Trump .

Which brings us to the very timely Strasbourg market attack , which is now reported in a second hand manner by the MSM as being orchestrated by Macron . Unusual and suspicious reporting indeed .

A Kick in the teeth ?

Color revolutions are one of many deep state tactics designed to foment a reaction and initiate a chain of events leading to a desired result .

You can be sure of one thing though , the majority of normal people around the world are tired of the powermongers , warmongers and profiteers .

One day they will wake up and take back everything that has been stolen from them .