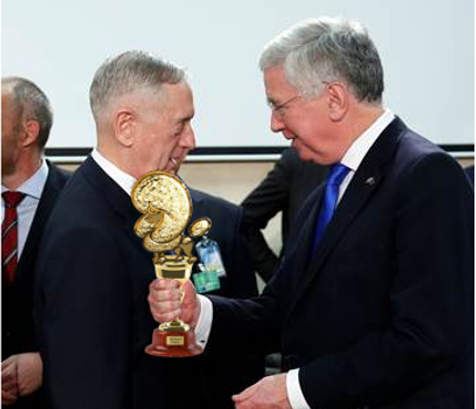 Yes , it has happened , UK defence secretary Michal ‘Capo’ Fallon has finally been awarded the Golden Poodle award for fawning , flattering flunkies . Fallon was awarded the coveted cup after praising US president Trump’s decision to continue the slaughter and destruction in Afghanistan in the name of corporate profit .

On receiving the award from US defence secretary James Mattis , a gleeful and glowing Fallon made the following speech :

“I would like to thank Donald Trump personally for this award , we have a lot in common , we both know the ‘art of the deal’ , the military corporate complex makes the deal and we nod our heads like donkeys . I am very good at nodding my head , an expert in fact . I would also like to thank the large multinational defence contractors for saving Europe from terrorists and helping to keep the UK public in check by helping us to install a surveillance state and stealing their personal freedom and cash . Of course the loss of freedom does not apply to us politicians , especially knighted politicians like myself . I would also like to thank the Don for suggesting how the UK should spend taxpayers cash in this joint venture , a venture which will definitely reduce terrorism and provide the UK with several crumbs from the table , as they say in political circles ‘a loaf given is worth several crumbs for a loafer’ .

This momentous event marks a trio of Tory backslappers , boot lickers and brown nosers who have been awarded the world renowned trophy .

On being asked about Michael Fallon & his award Donald Trump stated :

“Yeah , Fallon ruffled my rug , what a joker , quite the clown , drinks too much as well – probably from a trough” .

Too true Donald , too true .

This entry was posted in State Corruption, Uncategorized, War on Drugs, War on Terror. Bookmark the permalink.