Posted on February 3, 2017 by cultocracy

Three things cannot be long hidden: the sun, the moon, and the truth. (Buddha)

In recent days there have been reports in the mainstream media that the UK government controlled by the UK $TA$I , in turn controlled by the Crown is to launch a ‘fake news’ inquiry . Damian Collins MP, chair of the Inquiry committee, said:

‘The growing phenomenon of fake news is a threat to democracy and undermines confidence in the media in general.’

‘the greatest threat to the credibility of the media.’

I must admit , the comments made me smile for quite a while , credibility ?!? Confidence ?!?!? Unfortunately the man has either been grossly misinformed or more realistically is yet another sock puppet parachuted into a government position by the UK $TA$I to further their own already entrenched agenda of controlling the UK political system . He has only held the position for three months so maybe he is ‘finding his feet’ , maybe he will end up having a ‘rough landing’ .

Interestingly Collins has also opposed ‘sction 40’ . This provision , not yet enacted , required publishers to sign up to an ‘approved regulator’ or face financial penalties in any court libel cases . Basically a carrot & stick approach for control of the press , control by whom ?

Collins was also chair of the culture, media and sport select committee when it investigated the Russian doping ‘scandal’ . The reality is that a lot of modern athletes take banned substances , although in fairness Russia does have a history of doping .

The main issue with the singling out of the Russian team was that it was a case of sport & (geo)politics becoming entangled , it was a UK $TA$I inspired attack on Russia after the Russian intervention in Syria & the Crimea / Ukranian  conflict . The mainstream media Russophobia reached a tumultuous pitch with cries that ‘Putin himself ordered the doping’ and the ‘Russia should be banned indefinitely from all sporting events’ . Unfortunately the Olympics have always been used by the ‘super’ powers to further their own political agendas & boost the already over inflated personal ego’s of the ‘fat controllers’ .

Back to the ‘fake news’ inquiry . At first sight it would seem that the inquiry is directed primarily at Russia , apparently only Russia spreads ‘fake news’ . On Thursday the UK defence secretary Michael Fallon bellowed :

Russia is trying to undermine the West by ‘weaponizing misinformation’

‘Today we see a country that, in weaponising misinformation, has created what we might now see as the post-truth age. Part of that is the use of cyber-weaponry to disrupt critical infrastructure and disable democratic machinery,’

This is more than likely a distraction . Russia is not the intended target , the real target is the expanding multitude of alternative news outlets currently forming a new discourse across the internet . These outlets pose the real threat to the control freaks that have invested millions if not billions in shaping public opinion as they seem fit . The controllers have to blame somebody for their own failings in losing control of the discourse , the general public are too uneducated & moronic to see through their tricks & schemes . To this end they follow UK $TA$I directive number 1 : ‘If in doubt , blame the Russians’ . This fits their hornswoggled mindset & allows them sleep better in their beds & dream sweet dreams . God forbid that the UK public & indeed the world are starting to wake up to their duplicity & chicanery , that would be the stuff of nightmares .

There is an ongoing programme by most of the Western ‘shadow governments’ to assert their own dominance over alternative media . Of course ‘they’ forget that the real reason people turn to alternative media for the truth is that the mainstream has been peddling lies & mistruths for decades , it has become corrupted & rotten , just like the deluded individuals in the UK $TA$I that attempt to exert their own personal influence . I myself have been placed under subtle & not so subtle duress to promote certain topics since starting this blog , also to drop certain other topics . 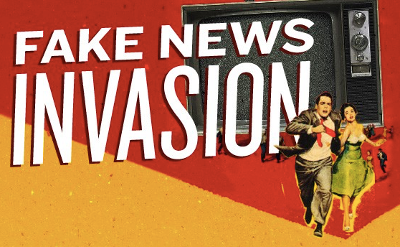 A more ominous threat posed by the ‘fake news’ inquiry regards veiled threats to tech & internet companies to ‘prevent the spread of fake news on their platforms’ . The inquiry plans to conduct ‘research’ as to whether computer powered algorithms can be used to ‘filter out fake news’ from the feeds carried on social media , news & discussion platforms . Large teams of programmers are already on the job and are busily beavering away on their keyboards as we speak .

Joseph Goebbels would be proud of their efforts .