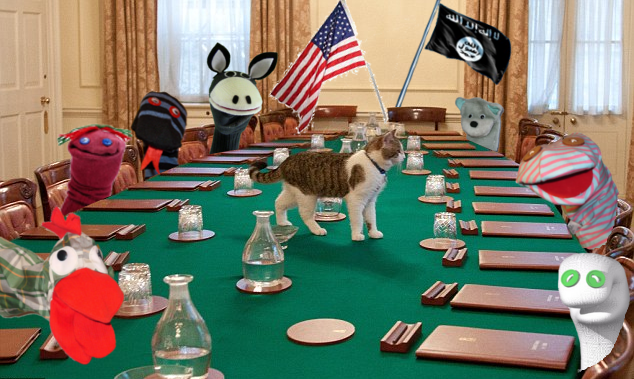 The Blair government cabinet meeting – none of us are liars , honestly .

In typical fashion Tony Blair today stated what we believed all along , that the Chilcot report cleared him and by default the whole war cabinet of “allegations of bad faith, lies or deceit” regarding the decision to send British troops into Iraq .

“The report should lay to rest allegations of bad faith, lies or deceit.”

He himself decided that the ‘intelligence’ findings were not falsified or used improperly and that Cabinet ministers were not controlled sock puppets that were misled in the run-up to the invasion . He also decided that he was not influenced in any way shape or form by the Bush clan & high ranking intelligence ‘experts’ .

In a statement he said: “Whether people agree or disagree with my decision to take military action against Saddam Hussein, I took it in good faith and in what I believed to be the best interests of the country.”

Mr Blair added: “The report should lay to rest allegations of bad faith, lies or deceit.”

I am sure we are all pleased for Tony & his fellow labour cabinet warmongers .

The Chilcot report was definitely worth every penny of the 10 million pounds it cost the UK taxpayer .

This entry was posted in State Corruption, Uncategorized, War on Terror. Bookmark the permalink.